5. The Lagoon and Causeway

5. The Lagoon and Causeway

Retrace your steps towards the Seaside Cottages (3) and turn right, down Union Road towards the Lagoon Causeway (5).Based on 1937 map.

At the Lagoon may be seen spawning salmon, various migratory birds, ducks and geese, kingfishers, herons, otters and beavers.

Proceed onto the Causeway

The causeway we see today was built by the Union Steamship Company in 1925 to link the hotel grounds with Snug Cove. The first settlers crossed by boat or a huge log which spanned the water. Before the concrete causeway was built, camping along the foreshore of what became the lagoon was very popular.

Built in 1910, this wooden bridge replaced the bundled logs that formed the first crossing of the Lagoon. It was destroyed by a storm in 1924, and replaced with the current concrete causeway in 1925. The lamp-lit causeway allowed visitors to access the northern parts of the Steamship estate, but also led to a rose-arboured pathway known as The Rockery, where there were benches to enjoy the view and listen to the band playing nearby. 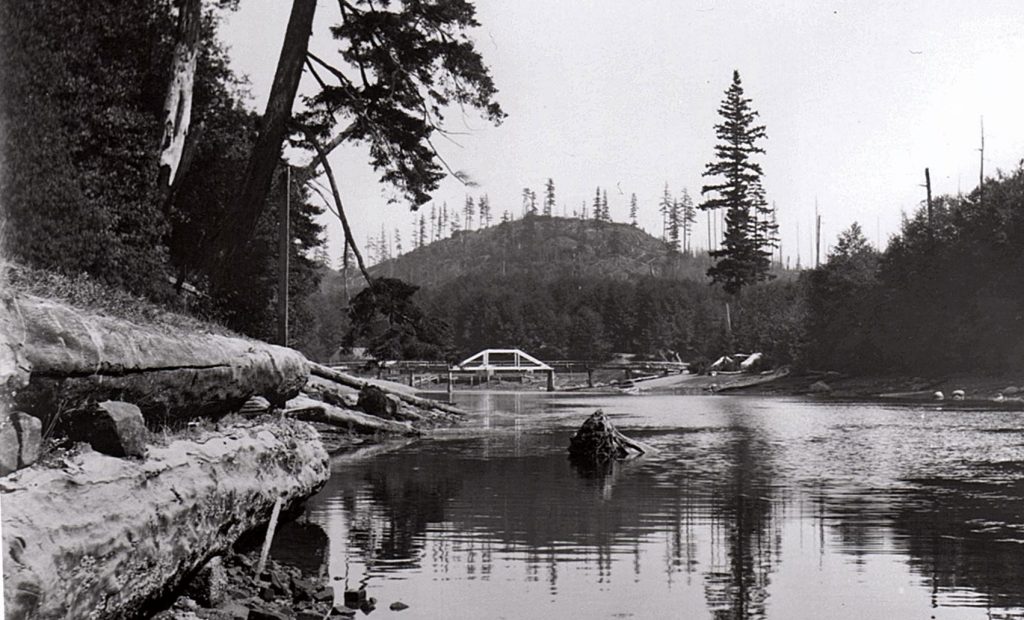 Looking over the edge of the causeway, east and west, you will see various structures built to support migrating chum and coho salmon.
In 1991, the concrete apron of the causeway was modified to add two fishways; a sloped fishway to assist salmon entering the lagoon to spawn, and a baffle fishway to reduce the outmigrating smolts’ vulnerability to predation. Above the causeway can be seen the gravel spawning bed that was added on 2011.

Looking east from this location you can see all of Mannion Bay with the location of the picnic grounds and Lower Dance Hall on the right, with Sandy Beach beyond it and after that the pier. To the left, a large resort once stood – now it is now a neighborhood of houses.

The Lagoon Trail was a scenic walk to Bridal Veil Falls. At one time, rustic cedar rails lined the walkway. It was built in a Japanese garden style by skilled workers employed by Captain Cates.

In the 1890’s, Joseph Mannion operated a brickyard on this site which supplied bricks for a growing Vancouver. His bricks were described as “an excellent article” in the Vancouver Daily News, November 11, 1890. At first, horses were used to run the machinery and later a steam plant was installed.

Following the closure of the brick clay operation, the site was converted to what became playing field #1 and then site of the popular bandshell.

The Bowen Heritage Trail is a route with several stops in a circle around the Snug Cove area. At each stop you can access a page of photos and highlights from Bowen's history. The map we're using (above) is from 1937, so a few older sites such as the Davies General Store don't appear on it.
This digital heritage trail is based on the original walking tour pamphlet written by Suzanne McNeil and Baiba Thomson for Bowen Heritage in 1997, in cooperation with the Greater Vancouver Regional Parks Department. This digital project received financial support and encouragement from Heritage BC, for which we are grateful.
Go to Top